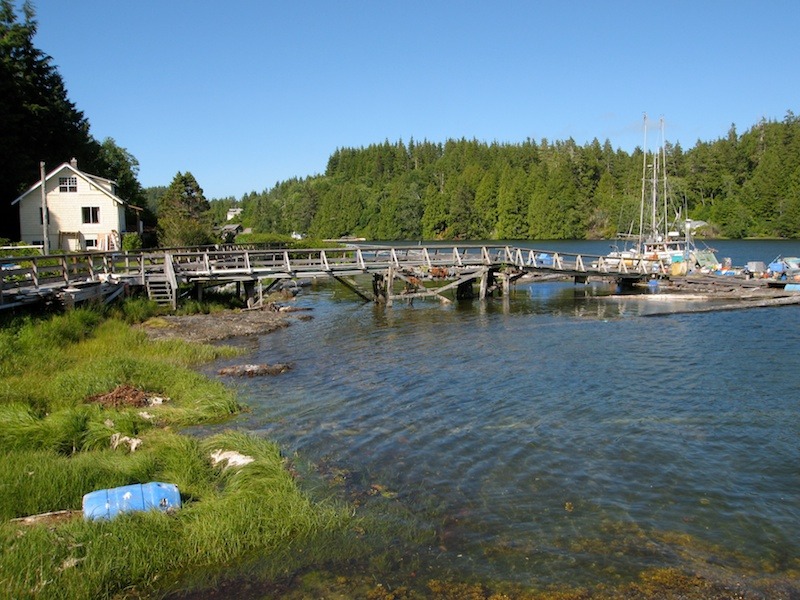 We woke up early but easily.  The rental car had been returned, and we had everything all ready to go.  We were out of the door of the B&B at 6:00 a.m., and at the bus station a few blocks later.  The West Coast Trail Express bus driver, a gruff but nice Kiwi, gave us time to get coffee, and we were off.  We drove first to Port Renfrew, and got a look at the foggy Gordon river.  This was to be our ultimate destination.  A hiker came on, going to fetch his car at Bamfield.  I had to stop reading and making notes on our map when we continued.  That’s when we left pavement behind and started bombing down logging roads.  The bus driver had a CB, so he could tell the logging trucks where he was.  They are monstrous, and have the right-of-way.  My car sickness gradually went away as I watched the scenery and chatted with the guy who had just finished the hike.

Five and a half hours after the bus ride started we arrived at the “town” of Bamfield, where Kevin waited for us.  We had lunch at the Tides & Trails restaurant- cheeseburger and fries.  After lunch we bought some groceries and huffed our packs up to Marie’s B&B.  Nice place- a bit cluttered, but actually much nicer than we had expected to find.

We convinced ourselves that we had packed too much food (we didn’t), unloaded it from our packs, then went to see the town.  We took the water taxi to Bamfield West, which is the cute part of town.  A very nice boardwalk runs along the bay- it’s the sidewalk and main street of the town.

After exploring the boardwalk, we took a side trip out to Brady’s beach.  We did some rock scrambling out there to give ourselves a taste of what was to come.  Back on the boardwalk, we bought a few beers for later, then stressed out waiting for the water taxi.  We made it back to the restaurant at 5:45.  This, the only restaurant in town, closed at 6:00, but they were a bit flexible.  We had 3 heaping plates of some of the best, freshest Halibut ever.  Fantastic!

Tomorrow, the real adventure was to begin!