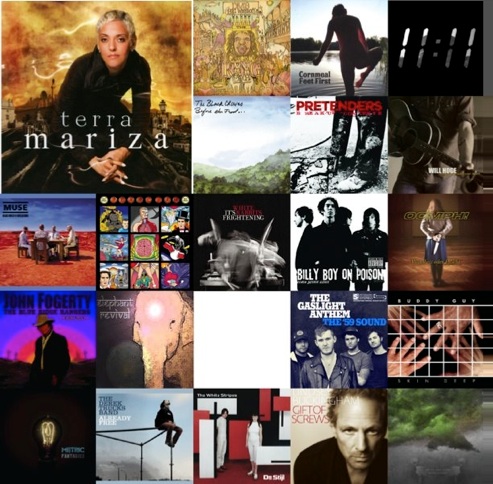 Here are the liner notes from this year’s CD (for those who don’t speak German, “Zweitausendneun” means “Two thousand nine”).

ALBUM OF THE YEAR

The Gaslight Anthem is punk rock heavily influenced by Bruce Springsteen. They’re from nearby New Brunswick, New Jersey. We saw them live down in Denver this year. I’m pretty confident I was the oldest guy in the mosh pit.

I have to admit to generally be underwhelmed by Pearl Jam’s latest CD. It’s good, but not great.

4. Too Many Tears (featuring Derek Trucks and Susan Tedeschi)

Blues from a master, with some great guests. The album also features Eric Clapton and Robert Randolph.

Derek Trucks is my choice for best living guitarist. Also recommended: Sweet Inspiration, Get What You Deserve, Our Love, I Know

While I wouldn’t say I despise them, I’ve never liked the Black Crowes either. That changed with this album, filled of guitar heavy jams. Also recommended: Been a Long Time (too long to fit on the CD), the rest of the CD.

Yes, the same Lindsey Buckingham who played with Fleetwood Mac.

8. Even If It Breaks Your Heart

Great guitar, almost country sounding. I never heard of this guy before, but when I was screening songs for this CD, I found myself singing these lyrics over and over again.

This isn’t country-influenced, or countryish, this is full-on country music. On another track from the same album, Fogerty sings:

But if memories were all I sang, I rather drive a truck

But it’s all right now, I learned my lesson well

You see, ya can’t please everyone, so ya got to please yourself

Apparently he took this to heart, and wrote an album he wanted to write. I saw him in concert this fall. An interesting affair- he alternated between this album, and old CCR hits. On the drive home, I turned off the CCR, and put this album on instead. It’s fun!

Cornmeal is a bluegrass country band from Chicago. While this song sticks to their bluegrass roots, in concert they are something else entirely. Although they play bluegrass instruments (fiddle, banjo, etc.), the music is more jam rock than anything. When I saw them this year, they covered Bob Dylan. And the Bee Gees. Somehow, it worked.

11. Sing To The Mountain

Local band from Nederland, Colorado. When I saw them in concert, I got to witness a washboard solo. Really.

The Pretenders, Break Up The Concrete (2008)

“Electro-tinged pop” This group also appeared on my 2006 CD.

The title should be self-evident once you hear the drums.

Flamenco meets heavy metal. This album features 11 songs dedicated to 11 musicians who have influenced the guitar duo. Hanuman is dedicated to Carlos Santana. Keep in mind that the percussion instrument you hear is Gabriela’s guitar. Also recommended: Atman (where they are joined with an electric guitar)

Having finally decided that I like the White Stripes, I started exploring their back catalog. I liked what I found even better than their newer stuff- it’s more raw, stripped-down. I believe the title is Dutch for “The Style” and is pronounced “De Style,” although there is probably more phlegm involved. Also recommended: The White Stripes catalog.

SONG OF THE YEAR

I was introduced to Muse by Dorinna, not Guitar Hero III, thank you very much. Muse came out with a new album this year, but I like this one better. I’m not sure this deserves the title “Song of the Year,” but I keep coming back to it…

The Dave Matthews Band, Big Whiskey and The GrooGrux King (2009)

Mellow end to this year’s CD.