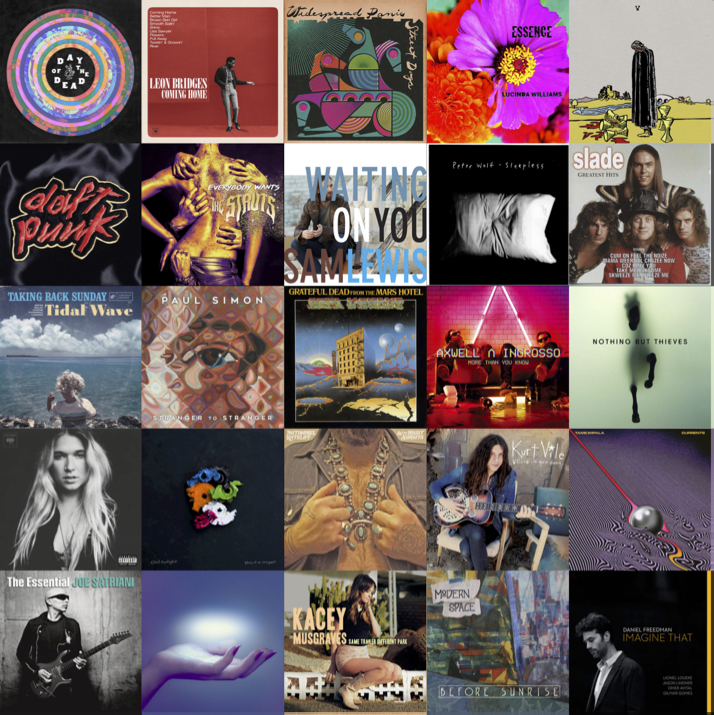 Welcome to my list of my favorite music of the year. Continuing the precedent set last year, I’m no longer publishing a CD, but instead offer links to playlists on Apple Music and Spotify.

This was an interesting year for my listening habits. Towards the beginning of the year, I started a Grateful Dead kick. I think it started on a trip to Joshua Tree National Park. There was something very relaxing about driving the roads listening to those mellow tunes. I don’t listen to music when I hike, but the songs burrowed into my head and stayed there. A group called The National put out a Grateful Dead tribute album, Day of the Dead, that became my favorite of the year. I explored a large amount of their back catalog and at press-time am working my way through the Dick’s Picks collections. There are enough live shows to last me for years.

This year’s collection has a little Dead interlude in the middle of it, but the majority of it remains an eclectic mix of rock, blues, country, jazz, R&B, and electronic. I continue to find and explore new music through a variety of sources. This year I added Apple Music’s A-List playlists to that list. These are regularly updated mixes of a particular genre- I spent time listening to Americana, Alternative, Rock, and Jazz.

If that sounds like a lot of music, you’re right. Last year I tried to stay within the same 78 minute span of time that can fit on a CD. I tried again this year, until I found myself stressing over what songs to cut to keep the length down. “Self”, I said to myself, “that’s a really stupid thing to stress about.” Now that I’m curating a streaming playlist, I can toss out the 78-minute length along with the CDs and cases.

This list, my 12th annual, is a sampler of my favorite music that I discovered this year. I hope you enjoy it.

Civil Twilight, Story of an Immigrant (2015)

Civil Twilight is an alternative rock band originally from Cape Town, South Africa. This song starts out quiet, before slowing building up to an anguish of emotion and heartache.

Also good : Nobody Really Cares If You Don’t Go to the Party, Three Packs a Day (a song about Ramen noodles, not cigarettes)

Kaleo is a blues-rock quartet that could easily be from New Orleans, but actually hail from just outside Reykjavik, Iceland. Their album A/B was one of my favorites of the year.

Also recommended: the rest of the album

4. The Less I Know the Better

Big-hair tiger-print-pants rock. There’s no doubt this is a song from the 80s. How can it be that I never heard it before this year? Crazy guilty-pleasure fun.

This song is not available on Spotify.

Not a new song, but a new one to me. Working while listening to electronic music can be productive. The high-energy beat keeps you moving, and there are no distracting lyrics.

The Struts are similar to the Darkness, sort of a retro-eighties, Queen-inspired rock band. Importantly, they pull it off. This was one of my favorite albums of the year.

11. Throw Down Your Guns

I really like this song, but am unfortunately bored by the rest of the album.

13. Things Will Never Be The Same

This song tells the story of Paul Simon getting locked out of his backstage, and a security guard who didn’t recognize him.

And I said “Wristband? I don’t need a wristband

My axe is on the bandstand, my band is on the floor”

By the end of the song, Simon turns the incident into a social commentary.

Yes, the saccharine Kacey Musgraves writes lyrics that would be at home on a Hallmark card… I like it anyway.

Another old song that I never heard before this year.

I’ve been slowly, very slowly, working my way through Rolling Stone magazine’s 500 Greatest Albums of All Time. This album clocked in at #432. Peter Wolf is, of course, the former lead singer for the J. Geils Band back in the 1970s, but has had a prolific solo career after that.

Also recommended: Too Close Together.

Classic R&B sound by a modern artist. In the same genre, I also enjoyed songs by Michael Kiwanuka (Cold Little Heart), Pops Staples (Somebody Was Watching) and old-school Sam Cooke (Twistin’ the Night Away (Live)).

Relax with a little jazz interlude. I found this song thanks to Apple’s A-List: Jazz playlist.

This song is not available on Spotify.

I listened to a lot of live Dead this year. Europe ’72 was one of my favorites. For this collection, I picked a fun studio song that I heard for the first time in 2016.

As mentioned in the introduction, The National it together a Grateful Dead tribute album this year. Not everything worked, but many did. These were my three favorites.

Might as well keep the jam band theme going for one more song.

This song starts off quiet, then ramps up to set the tone for the remainder of the collection.

To native English speakers, Zweitausendsechszehn looks intimidating, but it breaks down as follows:

One Reply to “Zweitausendsechzehn — My Favorite Music of 2016”