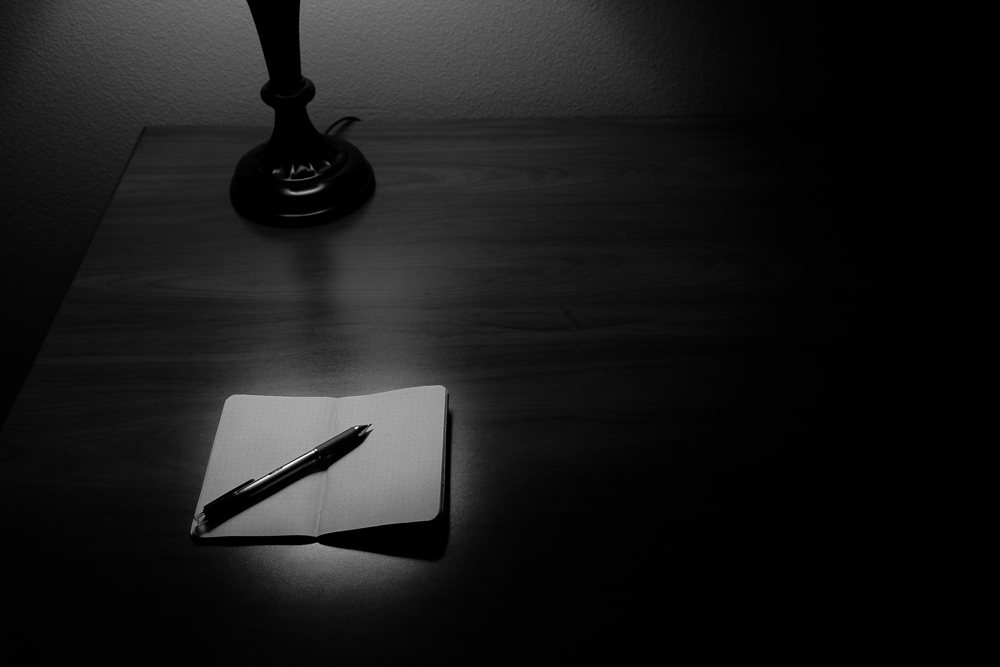 I was staring down at my journal, writing my plans for the week.  I had just turned the page to a blank one, and had stopped for a few moments to gather my thoughts.  Abruptly I realized that I had forgotten to take a photo in the airport.  I hadn’t had a chance earlier in the day either, busy as I was with errands and playing with Nate.  I had tried briefly to take a sunset shot, but the foreground was an unattractive parking lot, and I had put the camera away.  It was 9:30pm, and I hadn’t clicked the shutter once.  Was this to be the day when I broke my photo-taking streak?  I sighed, and turned back to writing.  My notebook was centered in the circular beam from the airplane reading light above me. It was blank, ready for ideas, thoughts, and schemes.  It was a metaphor for the week, and in fact, for the next day.  And that’s when I conceived my favorite image of the week:

Digital Darkroom.  Most of the work for this image was setting up the hotel room.  I had all the lights off except for the single desk lamp, and it took me a few tries to line up the notebook with the beam from the light.  I intentionally underexposed to throw most of the background into shadow.  In post-production, I further reduced exposure, shadows, and blacks.  I also boosted up the whites to increase the contrast and focus on the notebook.  And, of course, converted the image to black and white.