Back in August, I wrote about ending my daily iPhone photo project. I needed a break and wanted to do something different. The idea of what to do next came while rummaging through the freezer one night.

In the back, behind the frozen peas and forgotten pork chops, I found a small ziploc bag filled with… film. Film? Oh yes, back in the day photographers would freeze their film to keep it fresh longer. This was hard work, as back then you had to cut the ice from the pond yourself.

Anyway, by looking at the EXIF metadata in my Lightroom library, I can see that I took my first pictures with a “real” digital camera on November 7, 2005 (not counting the handful of images I made with the terrible terrible camera on my Blackberry of that era). When I switched to the Canon PowerShot S80, I abandoned film almost overnight, so we can use this, rather than carbon dating, to find the approximate age of the film. I went online and learned that low-ISO film will last 8–10 years. After that, it appears that cosmic rays will fog the film. I’m not making that up either- cosmic rays will literally penetrate the freezer and start exposing the film. High-ISO film is more sensitive to light, so it will degrade faster. My film was probably past the expiration date, but just barely. I threw out the rolls of ISO 400 and ISO 800, and decided to give a few rolls of lower-ISO film (50 and 100) a shot (pun intended).

The next task was to find a camera. One trip to the basement later, I returned with my old Nikon and my old Canon. The Nikon used watch batteries (!!!) so I was able to get it ready almost immediately. I ordered a battery for the Canon, since it was a much better and more modern camera.

The Nikon was an old FG–20 that I got it for Christmas in 1984- I was a sophomore in high school at the time. (The only camera I had owned before this one shot 110 cartridges, a format best forgotten) The camera has a light meter in the form of a mechanical pointer that flips up to tell you what shutter speed you should use for the selected aperture. Everything else is manual: You change the aperture by rotating the ring on the lens; you focus by manually turning the lens barrel. The viewfinder, designed for manually focusing, is sharp and easy to use. The camera was quite small, and felt “right” in my hands the minute I picked it up. I was instantly excited and eager to try it out. 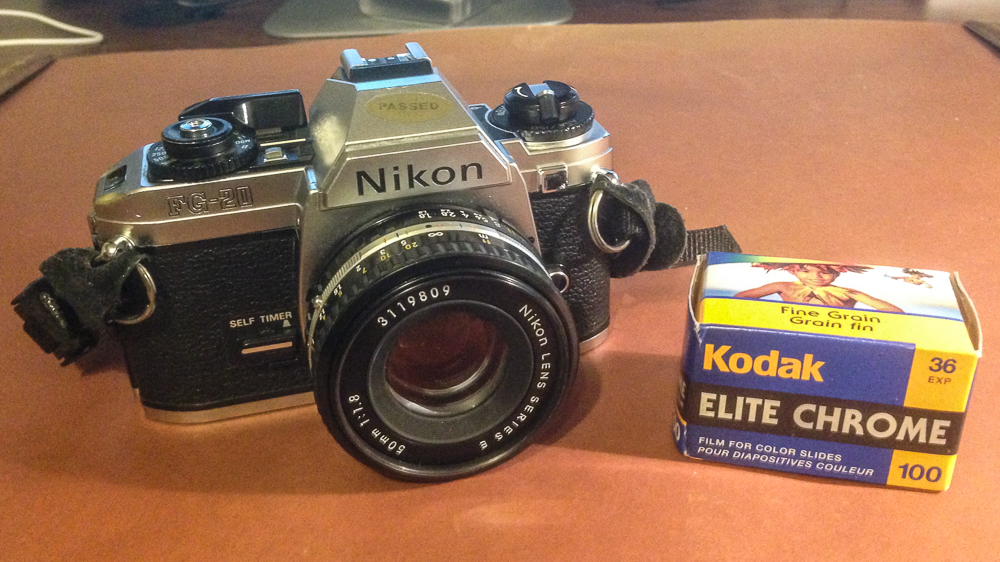 The next day I took a picture of a mural in Old Town.

I looked at the back of the camera to see the picture I just took.

I decided to take a second shot to be sure I got the image. I lifted the viewfinder to my eye, and pressed the shutter.

Why wasn’t the shutter firing? Were the batteries old? Was the camera broken already? Was it– oh wait, forgot to cock the lever to advance the film. All manual, remember?

I shot throughout the week, as I carried the camera around Old Town on my daily walks. I never did break the habit of looking at the back of the camera to see the picture I just took. Every time I saw nothing but the black plastic back of the camera and grumbled or smiled to myself. A few times I wondered what f-stop and shutter I had used- this information was also lost the minute I turned a dial. Drats, no EXIF. 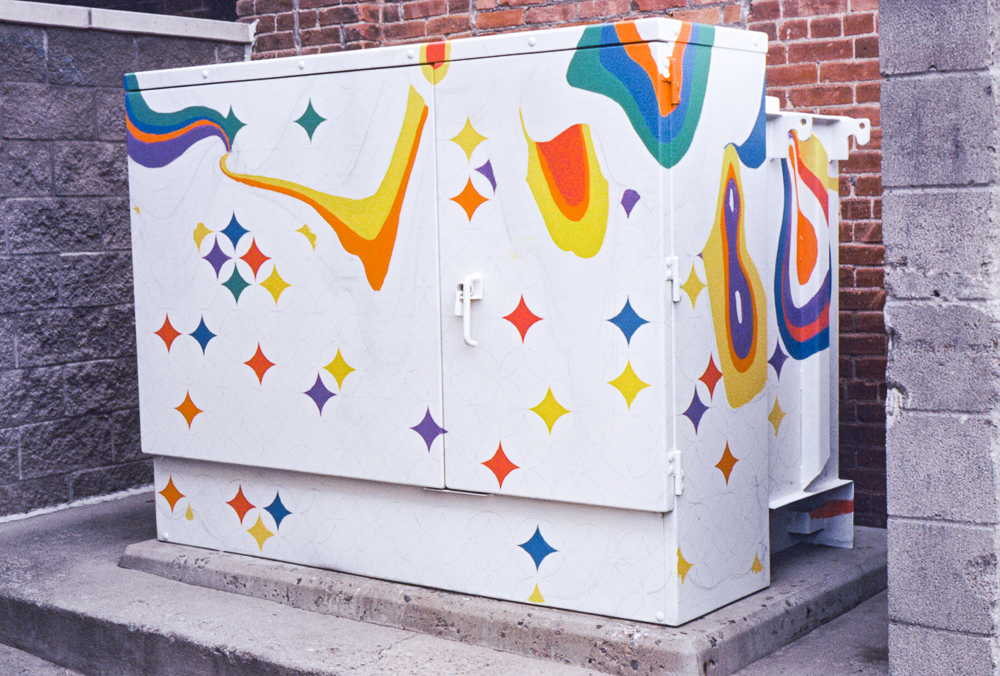 A few days later, a battery arrived in the mail for my Canon Elan IIe. I got this camera shortly after it was introduced in 1995. It was state-of-the-art, with three (count ’em- three!) autofocus points that were eye-controlled. A little sensor would, if the light was good and the stars aligned, determine which of the three focus points you were looking at and focus using that point. It had autofocus, automatic exposure, automatic film winding, you name it. I picked it up in the living room and started checking out all the controls.

All of these Canon’s worked the same way, with the same controls. So when I picked up the Elan IIe, I immediately knew where all of the controls were and how they worked. They worked the same as all of my other cameras, only… not as good. While the Nikon felt “retro”, fresh, and interesting, the Elan IIe felt exactly the same as my digital cameras, only less capable and more limiting. It had no soul. I took out the battery and brought it back to the basement without taking a single picture.

I made the Nikon my primary camera for the next few weeks. It was small and light, it was fun. I had to shoot much slower with all the manual controls, but slowing down with photography allows more care and attention, so that wasn’t a downside.

The big downside was, of course, the lack of feedback. Not being able to see the photo I had just made was hard. Even worse was going for a long weekend of camping and hiking and not being able to review the pictures afterwards. I had to wait until the film was finished- and the film counter was the only thing not actually working on the Nikon, so I didn’t know how many frames were left until the roll was finished. 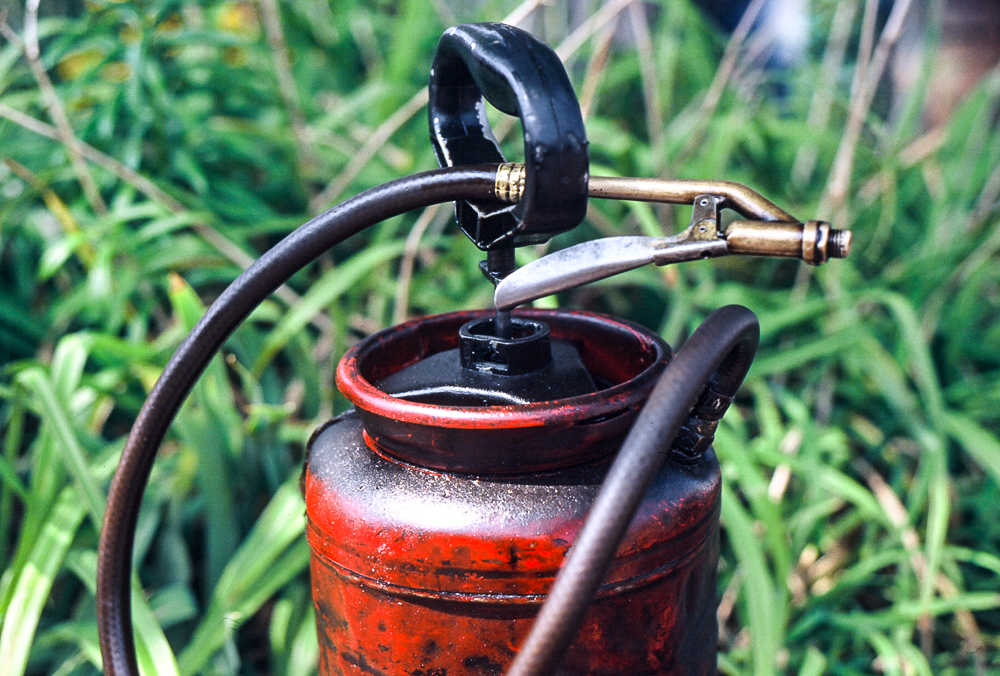 I shot my two rolls of film. I got a few good pictures, but the company I used to scan the images did a lousy job. They advertised 6MB scans, and the photos came back as 300K jpegs. (By way of comparison, photos from my iPhone are 2.3 MB, almost 7x larger). Processing and scanning cost $90 for the two rolls, working out to $1.25/image.

The experience was fun. It was nice to shoot with a simple camera with manual controls. Coming off my year-long DRiP project, I needed something different and fresh. It helped spark my creativity during a time when I needed the spark.

Will I go back to film on a regular or semi-regular basis? Not a chance. The cost, convenience, capabilities, and quality are all far better with digital. It was fun for a change, but the Nikon is back in the basement. And this time, there’s no film in the freezer to spark my interest a decade later. 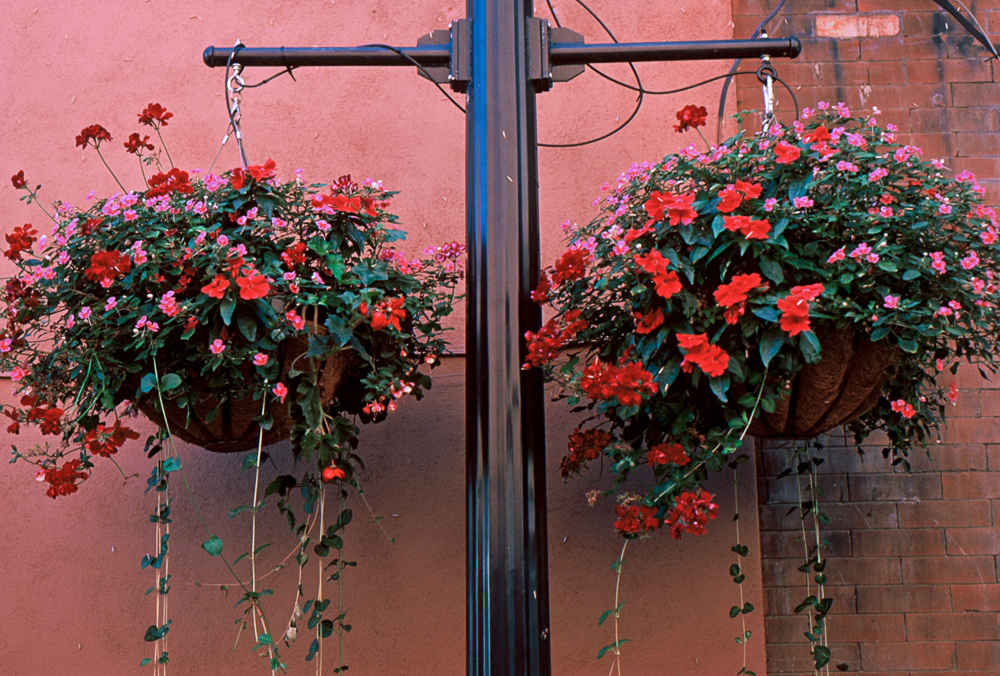 Besides, a few days after shooting my final roll of film, a package arrived in the mail… But that’s a story for another post.