Two weeks ago, I talked about how I liked to photograph the interesting façades in Old Town Fort Collins.. Last week, I talked about my love for blue and yellow. This picture inadvertently combined the two. The Northern Hotel is one of my favorite buildings in Old Town, and has been the subject of my photography before and has some interesting history as well. To quote from the website above (update: link broken October 2020)

In the late 1800s and early 1900s, the hotel hosted travelers arriving in Fort Collins by train at the nearby Colorado & Southern and Union Pacific railroad depots. Its changing names mimicked the city’s transformation from farm colony to business center. It opened its doors to the public in 1873 as the Agricultural Hotel then changed its name to the Commercial Hotel in the 1880s. Later, doing business as the Northern Hotel, it served notables such as Franklin D. Roosevelt, John Wayne, Olivia DeHaveland, and Vincent Price. In 1936 owners gave the building a facelift by adding an Art Deco façade with floral and geometrically patterned accents. The remodeled structure anchored the city’s downtown district until declining passenger rail service decreased the hotel’s value after World War II. A 1975 fire that caused extensive damage to the building’s third and fourth floors punctuated this gradual decline. Despite the hotel’s misfortune, the aging building continued to house popular restaurants and other retail businesses.

The Northern Hotel, recently remodeled and repaired, now holds senior apartments above storefronts on the ground floor. This shot of the art deco façade became my favorite image of the week. 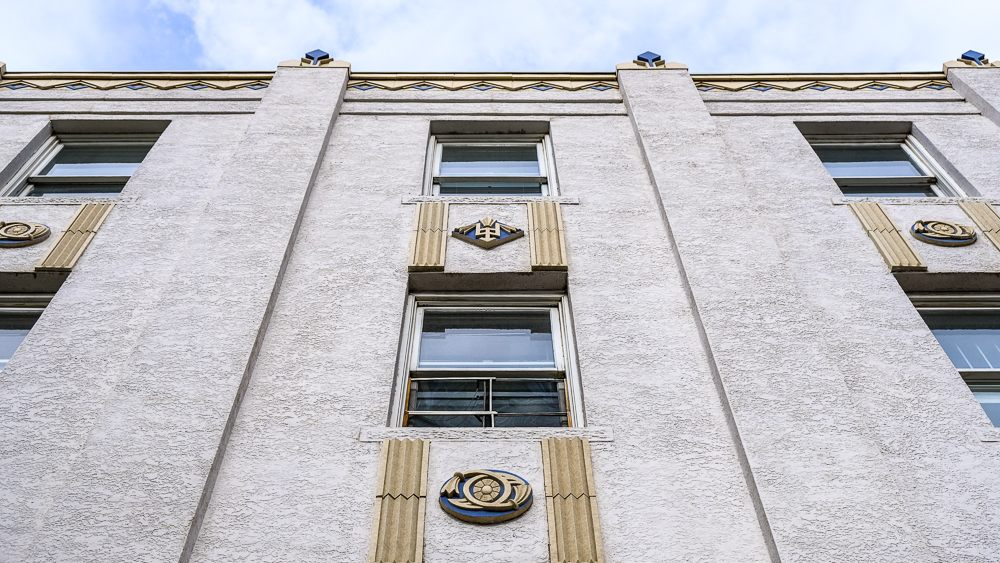 Digital Darkroom. The most obvious adjustment is the fact that I boosted the clarity to +100 to bring out the texture in the stucco. I also boosted the blue and yellow (along with orange and purple, which went along for the ride).