“What time is it?”  My wife asked as we woke up in our tent.  We were camped above tree line near the American Lakes, in the Colorado State Forest.  The sun was still rising, and the day promised to be a good one.

“Time to take pictures.” I replied.  Stopping only to grab the camera and tripod, I set out.  I spent the next hour and a half walking around the area.  I hiked from our camp near the outlet of the lakes up to Snow Lake, and looped around the American Lakes on the way back.  Although there were plenty of people camped nearby, I  saw only one photographer and two fishermen out of bed.  I shot various different subjects throughout the morning.  On the climb up to Snow Lake, I looked back the way I had come.  The light wasn’t too great, as I was shooting into the sun.  I decided to take advantage of that, though, and cranked the aperture down to f/22, causing the sun to turn into a starburst with some great lens flare.  The reflection of the sun in the lake, also with a starburst, made it all work, and turned this into my favorite image of the week. 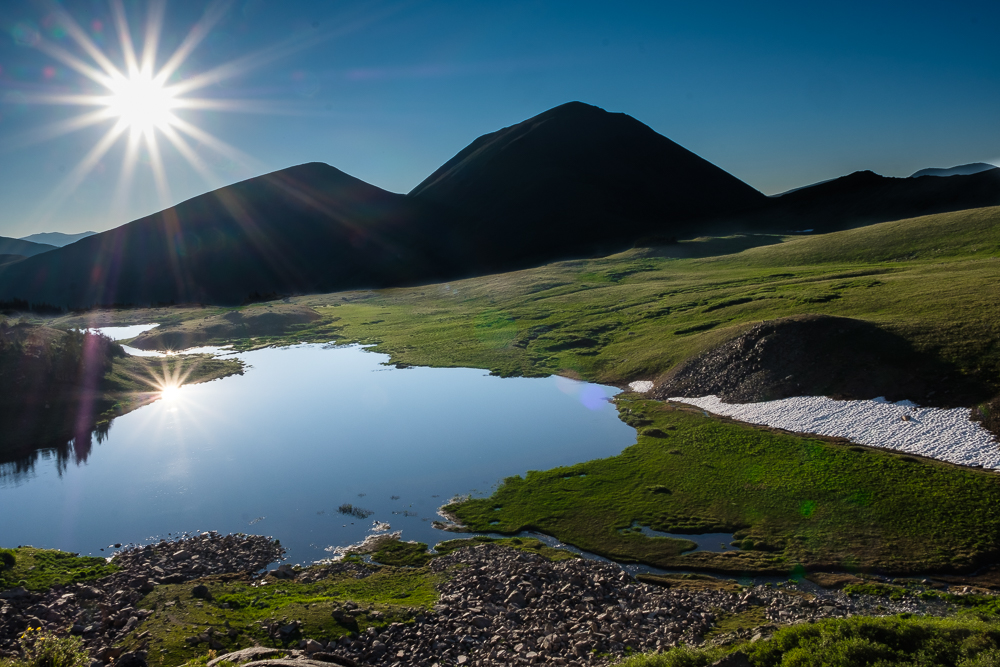 Digital Darkroom. Shooting into the sun results in an image that is underexposed and washed out.  Some worked needed to be done to bring this back to what I remember seeing when I pressed the shutter.  It took some time experimenting before I found the settings that worked.  First, I lowered highlights (-51), giving definition to the suns.  Increasing exposure (+1), contrast (+18) and clarity (+25) restored the light in the foreground to what I was expecting.  The mountains got a lot of snow this winter, and it melted late in the season.  The grass was a spectacular green, so I pumped up the saturation of that green to +70.  All of that left the foreground in great shape.  For the background, I dragged down a graduated filter, using the brush tool to fix the fact that the horizon line wasn’t perfectly straight.  For that filter, I lowed the exposure by almost another two stops, pumped up more contrast (+28) and increased the saturation (+37) to bring back the blue in the sky.   The original image appears below.