To understand Brittany, think about Maine, with the following differences:

Other than that they are exactly the same.

We had a breakfast of pastries and coffee in a small park, and then went out to play in the ocean. As we arrived, the tide was going out, and a causeway was mostly uncovered to the rocky island of Le Grand Bé. We checked out Piscine de Bon Secours, a walled-off swimming area. The wall keeps water inside at low time. Nate played in the water a little bit and then we poked in tide pools. By then, the causeway to Le Grand Bé was clear, so we followed it and explored the island, which was covered with grasses and shrubs, wildflowers and ruins. Great views back at Saint-Malo.

There was a second island farther out, Le Petit Bé, with a fortress on it. Like Le Grand Bé, a causeway went there. With about 90 minutes to low tide, this one was clearly impassable, and would remain so until an occasional super-low tide, a few times a year. There was a even a guy swimming over the causeway.

But the water was a a Caribbean blue, so we played in the water while we waited to see how low the water would drop. Well — that’s curious — that woman is 1/3 of the way across and it’s not quite up to her waist.

I noted the position of the waves, and a few minutes later noted it was going out at a rapid rate. I started to wade across the causeway. Slowly. Slowly. I stopped when the water was waist-deep — a bit concerned that a rogue wave and strong currents would pull me out to sea. Then I took a few more steps, and a few more, and then… I was on the other side. Huh. Now that’s interesting. I went back and we waited a few more minutes before picking up Nate and attempting to carry him. More people were crossing now, and I was surprised to note the water was only knee deep.

We explored the tiny castle for a max of 30 minutes before deciding to go back to town for lunch. 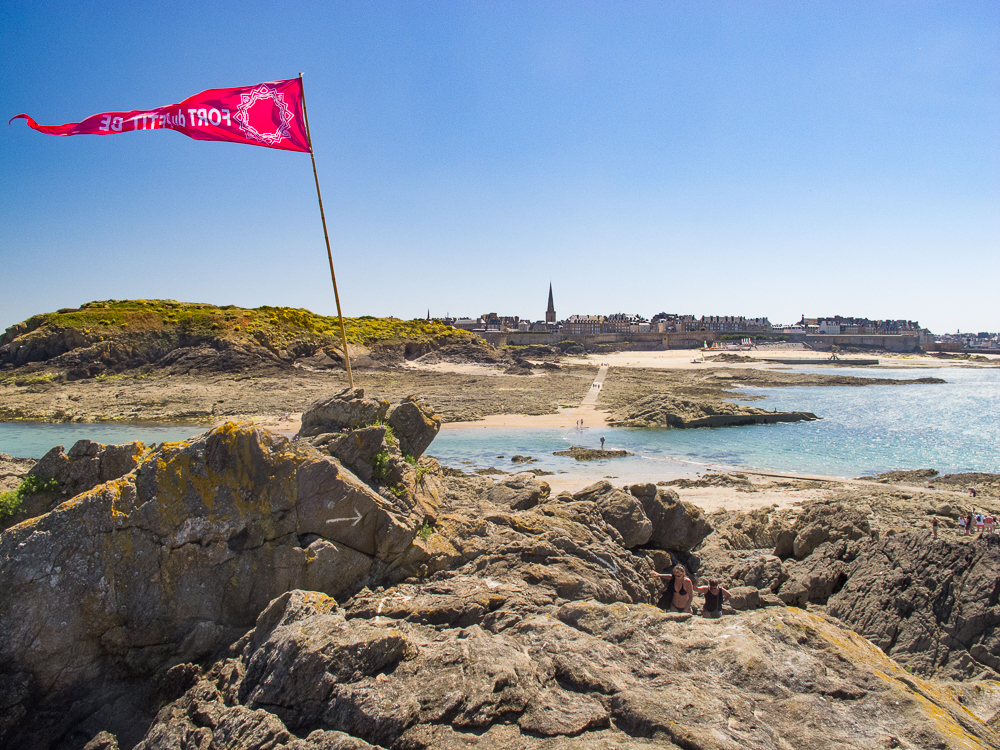 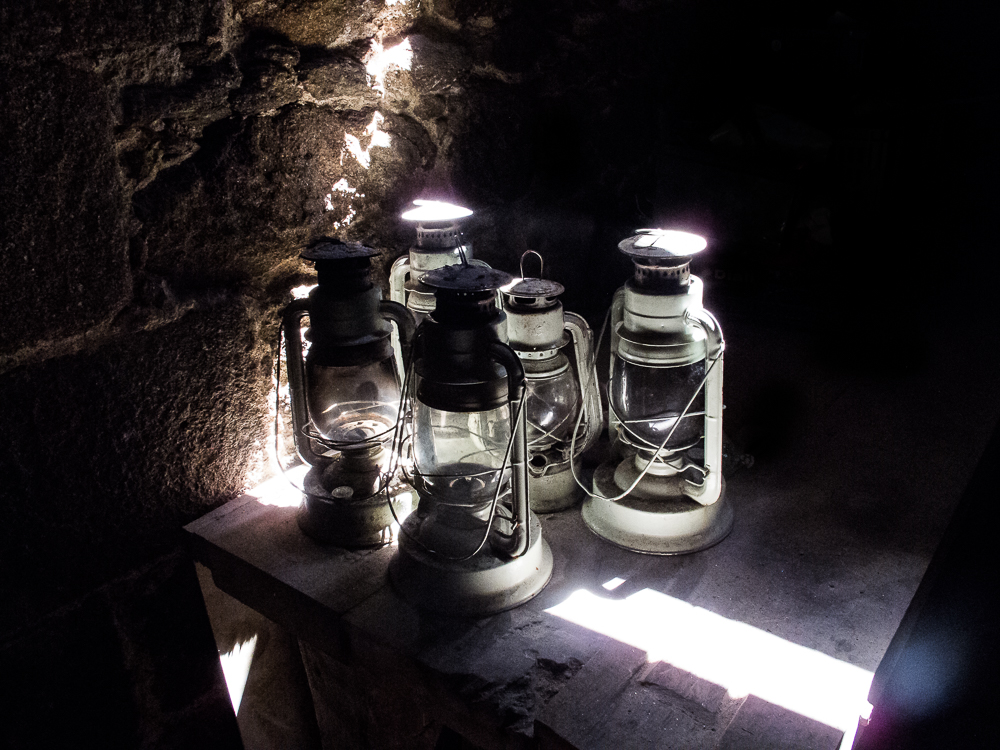 Our feet stayed dry as we walked on the rock causeway… Turns out that the tides in this section of France are among the highest in the world.

Nate was disappointed at the lack of escargot in Brittany, but cheered up when we noticed buckets of mussels on street-side tables. I looked up “How to eat mussels” on the Internet, since I had never had them before. I didn’t really want them, but I couldn’t let the six-year-old show me up, so we both tried them. And both loved them- they became Nate’s default food in Brittany. For my main meal I had a bacon, egg, and cheese… galette. And washed it down with a cider. 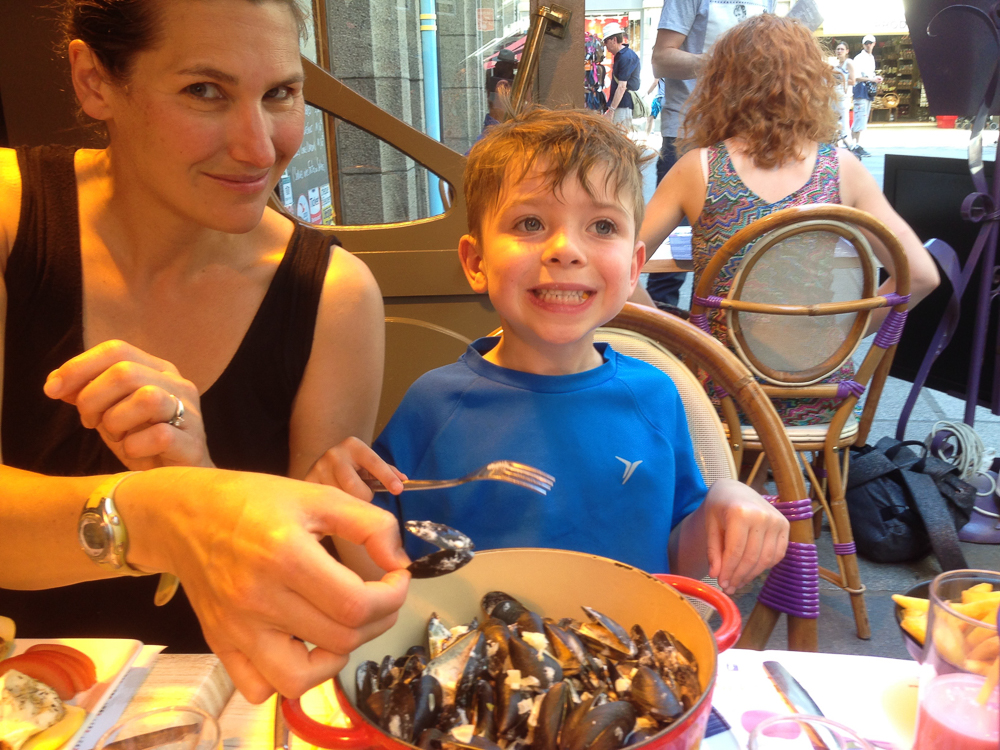 After lunch, I went in search of rental bikes. The first place I walked to had no tag-a-longs, and no English speakers. The second place didn’t have an address and when I called there were again no English speakers. I solved this conundrum by going to the tourist information center, and having them translate for me.

Finished with the errand, I returned to the beach, where Nate and Dorinna were frolicking in the waves together. The tide was rising, and the amount of beach was decreasing. We were all pretty tired, so we went back to the hotel to shower. We decided to mix it up for dinner and go out to a pizzeria. I had a pizza with tomato sauce, peppers, chicken, onions, and… curry. I missed seeing that last ingredient on the menu. If you are thinking that sounds different and interesting and might be quite good, let me assure you that it was not. It was my worst meal in France, albeit partially my fault because I chose it. I say partially, because Nate’s plain tomato sauce was pretty substandard as well. I washed it down with a local beer (meh) and a local cider (good).