This is a series of posts about what I have dubbed the “No Agenda Vacation” from August 2018. I’ll chronicle our 13-day road trip through the southern Colorado mountains with stories and photos. With luck you’ll see a new post on roughly a weekly basis.

Good to finally be out in the woods again.

Our day started with breakfast at a bowling area. Westcliffe has a combination restaurant-bowling area-community center, and they serve a mean breakfast burrito. The eggs, sausage, and green chili kept me full until dinner time. Out the picture window was a panoramic view at the Sangre de Cristo mountains. We would be there after breakfast.

Our hike for the day was to climb over Music Pass, drop down into the Sand Creek valley, and go up the other side to a set of alpine lakes. Upper and Lower Sand Creek Lake both looked interesting; we would have to choose which one we camped at later in the day.

The Sand Creek valley is part of the Great Sand Dunes National Preserve. This is a large area outside of the national park that protects the headwaters of Sand Creek. The creek itself is a key part of the sand dune geological system. It borders the dunes to the west. As sand blows up into the mountains, the creek washes it back to the dunes in a vital recycling effort. For this trip, though, we were high enough that this was just a typical mountain stream.

The road to the trailhead was a fun 4WD trip. This was Dorinna’s first time driving off-road with the Jeep, and she did fine. My friend Jon made it up the road once with a Subaru Outback by strategically moving rocks so that they were underneath the wheels, but neither one of us recommends this approach. Although short, this is definitely a road for Jeeps and trucks.

The hike to Music Pass was less than exciting, although not as steep as I expected, so that was nice. When we got closer to the pass the trail got steeper and the views began. The trail started to traverse alongside the pass rather than climbing over it directly. This meant we could see the peaks across the valley, sticking up over the pass, but it was a long time before we got a view of the valley itself. In the meantime, though, we could see across the other valley to the Wet Mountains, now looking rather small. It was time for lunch, but the monster burrito breakfast made that completely unnecessary.

The hike down was easy, which meant we would be cursing it in two days time. We made it to the lovely meadow on the valley floor, and started up. It was getting late and when we saw the sign at the Lower Lake Trail saying it was 1.7 miles to Upper Lake I knew we were done. With the steepness we would have arrived around 6:00pm. Instead, we backtracked a bit down the valley (past one tent) to an area all our own. It was a lovely campsite with Sand Creek nearby. While it was in the open, it didn’t feel exposed, and this turned out to be a great camp. We spent the late afternoon reading and relaxing. 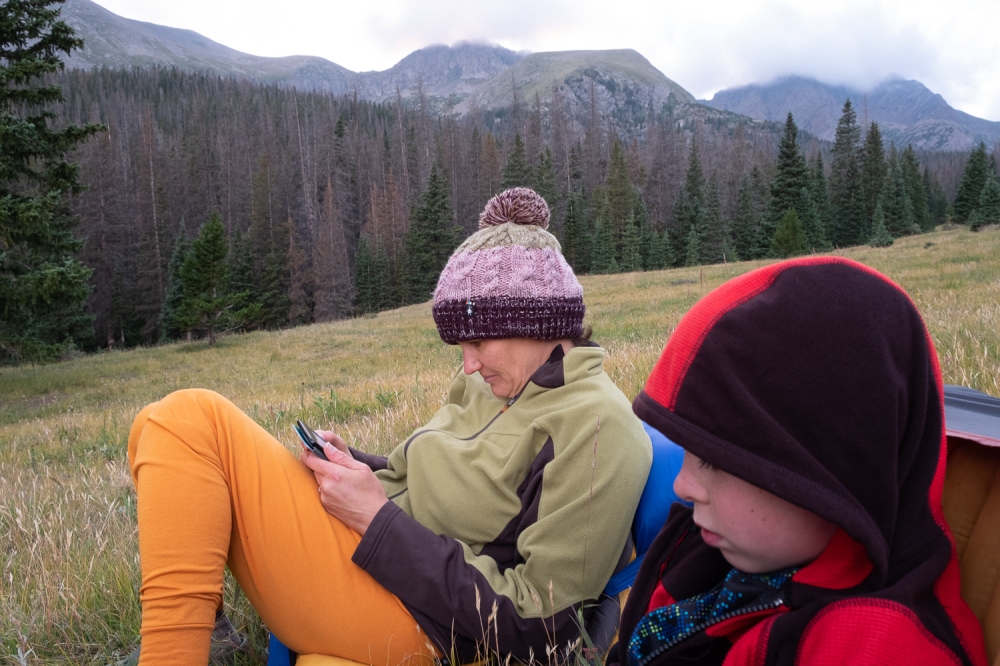 Dinner was great- black beans and rice with cheese, spices, and Fritos (yes,Fritos). We got this lightweight and quick recipe from my friend Doug, and this is a dinner we’ll be repeating frequently. After dinner the clouds threatened, then cleared away, then threatened again. The swirling mists around the peaks made for great photos as our first day in the woods came to a close.