We started our next day by continuing along the Medano Pass road into the main section of Great Sand Dunes National Park. The road is very scenic, and passes right next to some giant dunes. One stretch of the road is filled with deep sand, which was fun with the Jeep. Under-inflated tires are key here.

We spent a bunch of time in the Visitor’s Center while Nate worked on his Junior Ranger booklet. For those not familiar with the program, national parks offer a booklet of activities for kids. The kids complete the booklet, are interviewed by a grown-up ranger, recite a pledge, and get a cool pin stating they are a Junior Ranger. In addition to learning about the park in the visitor center, we also learned we’ve been pronouncing “Medano” all wrong ( MED-on-oh is correct). 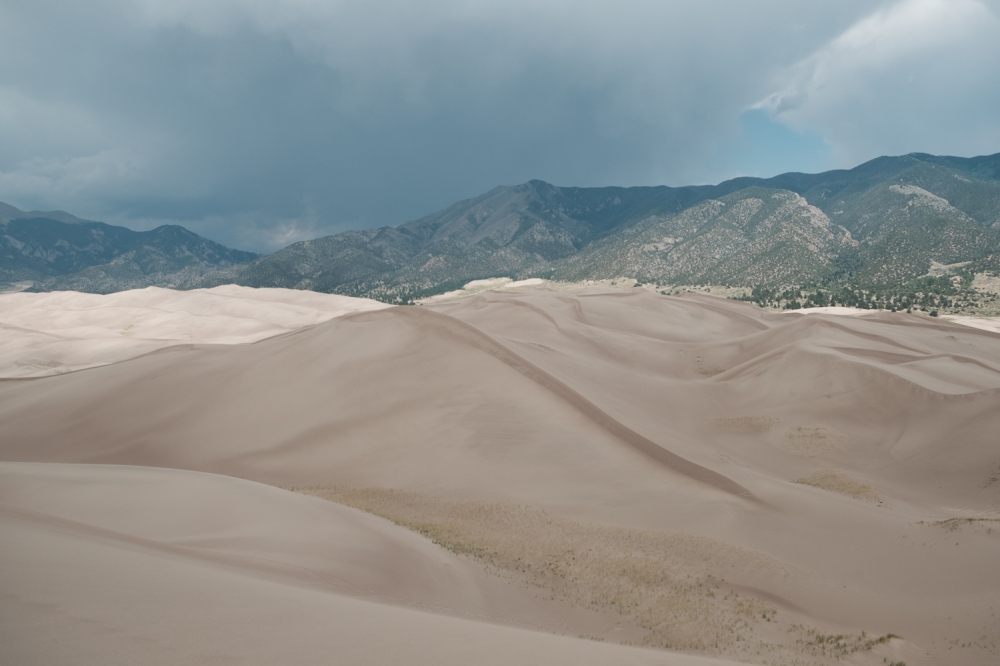 About 400,000 years ago, the San Luis valley, tucked between the San Juan and Sangre de Cristo mountains, held a giant lake. Eventually, what became the Rio Grande river cut through the volcanic rock at the south end of this valley. The water drained out, leaving lots of sand behind. Winds blew across the valley, blowing sand into a protected pocket formed by three mountain passes. Counter-winds from mountain storms, as well as the action of Sand and Medano creeks, brought the sand back into the valley, forming a recycling system of sand. The tallest dunes in this system are over 750 feet tall. Today, the Great Sand Dunes form an unexpected treasure in the middle of the Colorado Rockies.

Finally finished with the visitor center, we left and started our hike up High Dune. While not the highest dune in the park (that title belongs to Star Dune), High Dune rises 699 feet above the parking lot. Climbing it requires crossing a flat area of Medano creek (dry this time of year), and then snaking up a series of ridges to reach the summit. This requires a lot of climbing up, and a lot of climbing down, through soft, powdery sand. It’s a bear of a climb, but the downhill sections are fun. Nate gave up about 2/3 of the way to the top, but he had fun with Dorinna on the way down. I put my head down and kept climbing, 100 paces between breaks to catch my breath. As I approached the top, the wind picked up, and I was (literally) sand-blasted along the final summit ridge. It felt like I was climbing across a snow-covered arête. With each step, the pressure of my foot pushed sand past the angle of repose, and fun little avalanches of sand (sand-valanches?) flowed down the ridge in slow-motion.

The hike down was much easier, as I could slide down the sand with each step. At least until I reached the bottom. The final flat stretch back to the car felt like it lasted forever, especially with boots filled with sand.

After the hike, we drove to the store to get ice and rent a sand sled for the next day. After playing in the nearby Medano creek and meeting the neighbors, I got to enjoy a pre-dinner beer at camp. It was a relaxing evening of reading and crosswords.

This is a series of posts about what I have dubbed the “No Agenda Vacation” from August 2018. I’ll chronicle our 13-day road trip through the southern Colorado mountains with stories and photos. With luck you’ll see a new post on roughly a weekly basis.