Another late start, but we broke down camp, and headed for Lake City for gas and M & M resupply. On the way there, we stopped there to say hello to this moose.

Lake City is a cute but tiny town in the San Juan Mountains. Like Creede, it’s a former mining town with a former population (5,000) much larger than now (400). At this point, tourism keeps it alive as it is the eastern hub of the Alpine Loop.

The Alpine Loop is the crown jewel of Colorado backcountry roads (good overview map). Two different dirt roads lead west out of Lake City. The northern route leads over 12,800’ Engineer Pass. The southern route leads over the smaller 12,640 Cinnamon Pass. Both routes link up at the townsite of Animas Forks. From there, spurs lead off to Silverton and Ouray. Along the way, the Alpine Loop leads to a myriad of old mining towns and the most spectacular mountain scenery in Colorado. The drive itself is also an interesting challenge. Four-wheel drive and high-clearance are not optional, and a fear of heights is a distinct liability. 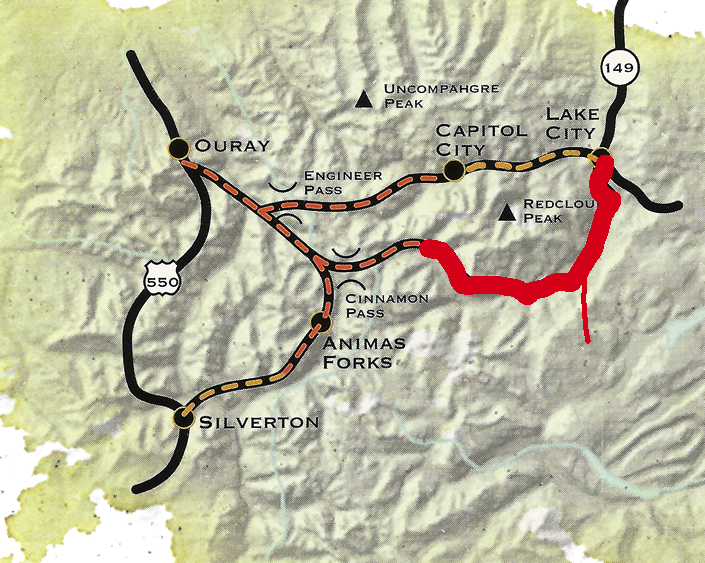 We headed up Cinnamon Pass road, the easier of the two loops (We’ll tackle Engineer Pass on Day 12). The bottom portions are smooth dirt roads, suitable for regular cars. We hit the turn off for the mining ghost town of Carson, and decided to pay the town a visit. Carson is another old mining town. It’s located at almost 12,000 feet just below the continental divide. Once holding 500 people, it’s now a collection of abandoned buildings. Getting there was thirty minutes of 4WD driving each way. We ate lunch and had fun exploring the ruins before the drizzle started and we headed back down to the main road.

All of that was great, but it was late when we arrived at the Silver Creek Trailhead (no, not that Silver Creek, this is a different one). We packed up and started our backpacking trip.

The trail was steeper than expected, and when we arrived at our destination for the day, campsites were non-existent. There were some flat spots, but too close to the stream and covered with big rocks. Everything else was on a steep hillside. I found an emergency fallback site, and we made a plan to hike 30 minutes more and retreat to this spot if necessary.

This 30-minute period, which stretched to 45 minutes, turned out to be the low point of the vacation. Not only didn’t I find anything, but I scared myself getting into some dangerous off-trail terrain. Oh, and as the sun set and the temperatures dropped, the rain started. I was hungry, thirsty, cold, and dispirited as we retreated to our fallback site. The site was in between the stream and the trail, and too close to both of them to be legal. There was even an inconvenient large lump of grass and dirt in the middle to make sleeping uncomfortable. Out of options, we camped there anyway. We got some freeze-dried dinners going and ate inside the tent. Food and warm clothing improved the evening, and we made plans for our adventure the next day.

Strava link. The amazing thing about this GPS track is watching me look for a campsite. It shows I walked five miles, but on the hike out two days later, I only logged two miles. I literally walked three miles searching for a campsite which is… exceptional.