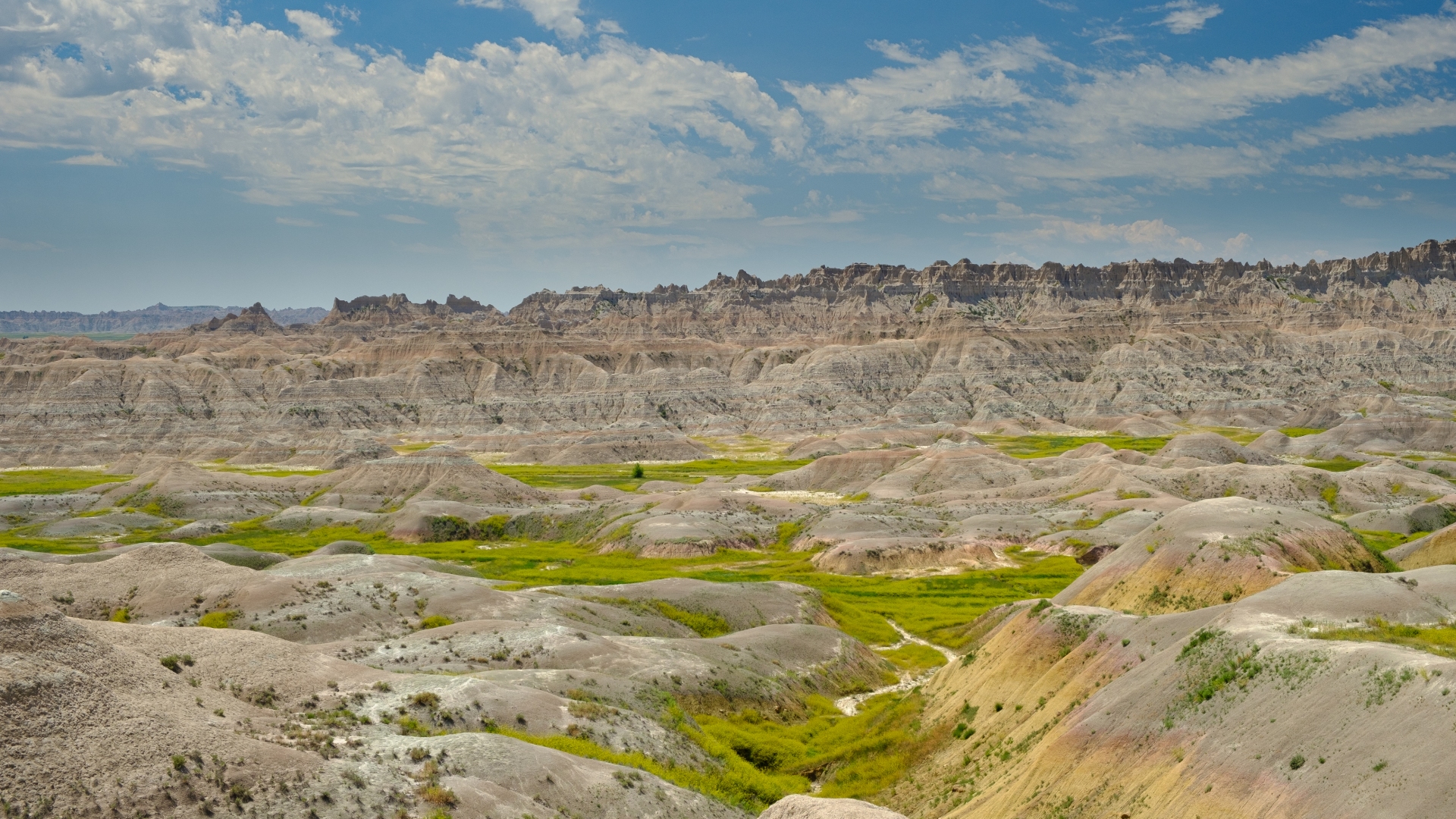 We set an early alarm, and got up before it went off. The alarm song was, of course, Badlands by Bruce Springsteen. We listened to it multiple times per day to set the mood. Why set an alarm on vacation? The desert doesn’t reward sleeping in, and neither does the Badlands. We ate a quick breakfast, but it was already heating up when we left camp.

We drove a short distance up the Badlands wall and through Cedar Pass to the parking lot for the Notch trail.

This was a short but scenic hiking trail. I had hoped to do multiple short hikes, but with the temps in the upper nineties, I knew we might not be hiking for long. The hike took us through the Brule formation. Composed of white siltstone, you could break off pieces in your hand, and it weathered into cones and spires.

The Badlands themselves form a long escarpment, with the high elevation to the north, and the White River valley to the south. The wall is constantly eroding, receding to the north. The hike took us through a small canyon. One point had a gigantic ladder that climbed up to a shelf on the side of this canyon.

From there the trail proceeded along a crumbling cliff face. A large concave cavity in the canyon, almost a pour-off, hosted hundreds of chirping swallows.

The main walkway continued to an overlook above the White River valley.

By the time we got back to the car, the heat and humidity had increased to the point where the family mutinied at further hiking. We drove a bit north and visited a small prairie settlement just outside the park. The settlement included an actual sod house, and we imagined homesteading there.

Driving back into the park, we spent the rest of the day exploring overlooks.

As we traveled west along the park road, the rock layers, and the subsequent terrain, continued to change. One pull-off featured a cluster of Bighorn sheep clambering across and down an impossibly steep slope to get to fresh grass.

One geological layer we visited was called the yellow mounds. On top of of the yellow mounds was the dull-gray Chadron formation. As our guidebook described, there were other layers deposited on top of this one, but a period of erosion in the earth’s geological history caused the rock to be “worn down to the Chadron”. This phrase, “worn down to the Chadron”, briefly entered the family lexicon as a synonym for the kind of sleepy malaise caused by heat and humidity.

We ended our journey in the Sage Creek Valley. I spent a long time gazing out at green and yellow rock mounds and formations. I’m already scheming backpacks in the area during the shoulder season. We drove back to the Cedar Pass area, and after stops at the visitor center and gift shops, we relaxed at camp (why so much time in the gift shops and visitor center? Air conditioning!). When it cooled down, even a little, the Badlands were bearable and beautiful. I’ll be back.