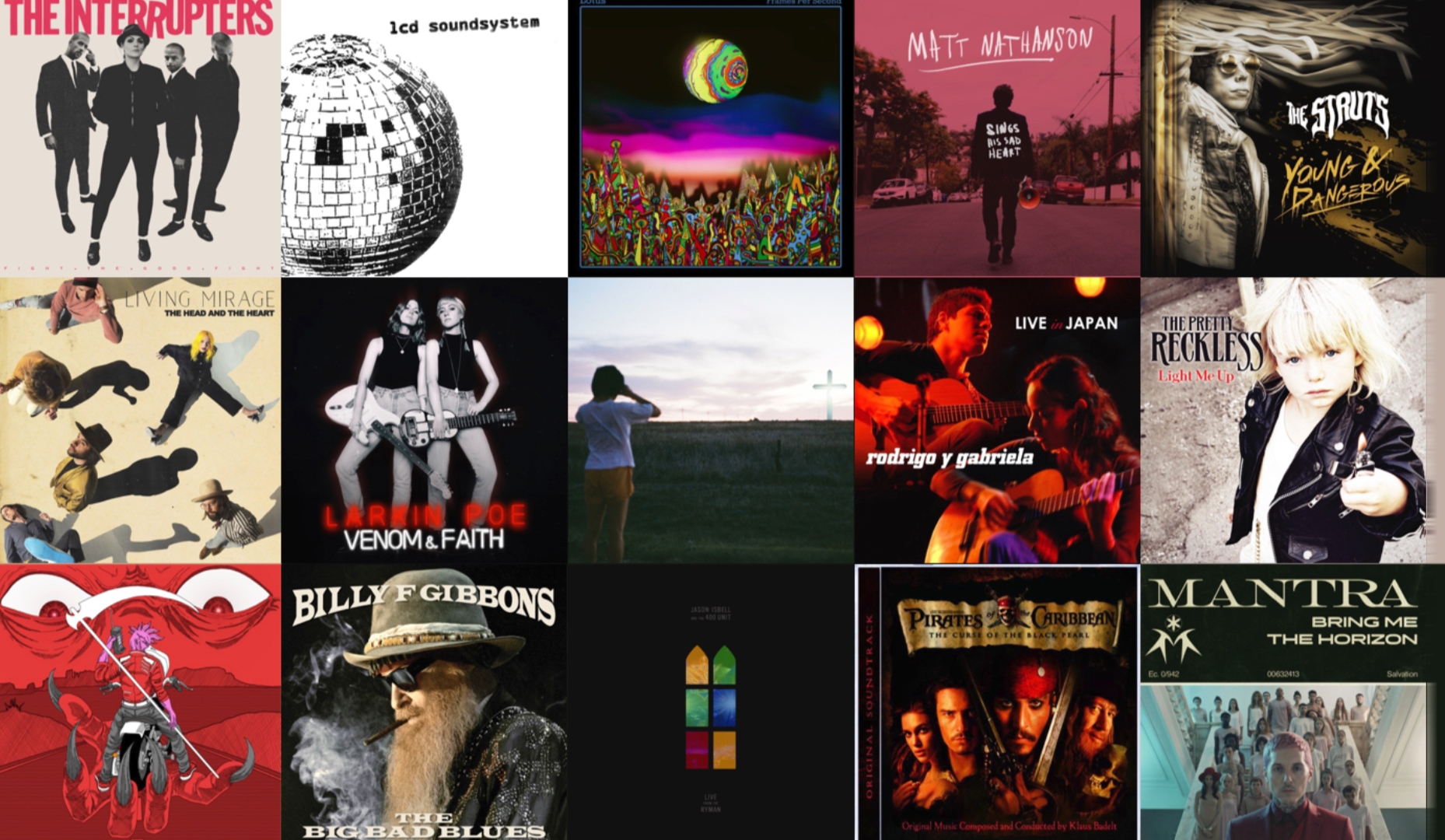 Welcome to my annual list of my favorite music of the (last) year. While I used to burn CDs, since 2016 I’ve been offering links to playlists on Apple Music and Spotify instead.

This list, my 15th annual, is a sampler of my favorite music that I discovered this year. I hope you enjoy it.

Klaus Badelt, Pirates of the Caribbean: The Curse of the Black Pearl (Original Soundtrack) (2003)

Arrrr! I spent a lot of time going back and listening to old movie soundtracks this year. This short stirring track is a good choice to kick off a music collection.

Great bass line. Alice Merton is a relatively-new song-writer from Germany. This was one of my favorite songs of the year.

Now I need a new thing

I love the driving drums and base coupled with the guitar-as-punctuation-mark licks.

My favorite track from the new Black Keys album. Other good songs are Tell Me Lies, and Fire Walk with Me.

Another song with a great bass line.

We saw this band as an opening act for Bob Mould last winter. In the Whale, is an alternative duo from nearby Greeley, Colorado. Loud, energetic, and with lots of flying sweat, they were a great way to kick off a concert. This song is a little more mellow than most of the album, which I recommend checking out.

“Do you want to start a cult with me?” The beats and spoken word “Mantra” reminds me of Muse.

The Struts are an English glam-rock band, following in the footsteps of The Darkness, but better. There’s actually two versions of this song on the album. Kesha’s sexy growl adds a little bit of extra titillation. If you like this song, Mary Go Round was part of my 2016 collection.

The Interrupters, Fight the Good Fight (2018)

This was my favorite in an album packed with tight, quick singles. She’s Kerosene is another great track.

A studio version of this song led off my 2007 collection. This live rendition picks up the pace and little and adds more energy. Rodrigo y Gabriela are a Mexican guitar duo who have long been a favorite of mine. Another good track from this album is Foc.

Unbelievably catchy song from The Killers.

I got gas in the tank

I got money in the bank

I got news for you, baby

You’re looking at the man

13. Daft Punk is Playing at My House

How did I miss this song the first time around? Catchy.

After you get past the creepy spoken word lyrics, the song turns into a pretty nice instrumental, complete with saxophone.

Hard rocking blues song from the main singer of ZZ Top. If you like the blues, you shouldn’t miss this album.

My favorite new band of the last few years, the latest from Greta Van Fleet. They appeared on last year’s collection with Black Smoke Rising. This year the hardest part was picking my favorite song of the album, but I eventually settled on this track. Lover, Leaver was another great song on the album.

Matt Nathanson first appeared in my 2014 collection, and his catchy pop songs have been a mainstay ever since.

A harrowing meditation on death and what it means for love.

It’s knowing that this

Likely one of us will have

To spend some days alone

Maybe we’ll get forty years together

But one day I’ll be gone

Or one day you’ll be gone

Mountain Goats, In League with Dragons (2019)

I started listening to the SongExploder podcast this year. Each episode takes apart a particular song, and the artist explains how the different parts came together. I’ve found it to be an interesting view into the art-making that goes on in the song-making process. The other thing it’s good for is exposing me to new music, and this song was one of my finds in 2019.

Eric Clapton has always been one of my favorite guitarists, and when I was younger I devoured just about everything he ever released. While I still like it, it’s also gotten a little too familiar. This recent release, live at the BBC, helps breath some freshness back into the old tunes.

Craig Finn is of course the lead singer of perennial favorites The Hold Steady. Both are famous for catchy songs with grim lyrics.

24. I Don’t Get Invited Parties Anymore

Every Day’s the Weekend appeared on last year’s collection. This was one of my favorite albums of the year, chock full of catchy pop tunes. This is my favorite track, but Isabella and Misery Guts are also great. She reminds me a little bit of Courtney Barnett.

26. Everybody Wants to Rule the World

Another cover from the Teal album. Does this song sound almost exactly like the original? Yes. Is this variation almost devoid of any kind of creativity? Yes. Does it still make me smile every time I hear it? Yes. Yes. Yes.

Turnpike Troubadours, A Long Way from Your Heart (2017)

Song about a fire from an Oklahoma-based country band

To native English speakers, Zweitausendneunzehn looks intimidating, but it breaks down as follows: